I didn’t make friends until I was in high school. I moved more times than I can remember (that is a truthful statement, not hyperbole). So when I finally made friends in high school, I cherished them in ways I still can’t articulate nearly twenty years later.

They are that precious to me.

In fact, every friend I have ever made is that precious to me.

As the years since my first day of high school in September 1997 have passed, I have gained many incredible friend. Sometimes, when I stop and sit for a minute to think about the fullness of these relationships, it overwhelms me with gratitude for these people.

How are they mine?! What did I do to deserve them?!

(The answers: God. And nothing — it’s all God’s grace that they’re my tribe!)

Most of these friendships have flourished. My high school friends gave me time and distance when I needed it in college to figure some stuff out. My college friends helped me do a lot of the “figuring it out.” And my post-college friends helped me when I was lost between those who loved me in high school and those who loved me in college, when I was torn between two groups — and now they love me because I am strong in who I am. When I say I am who I am because of the influence of these women, I mean it with the whole of my heart.

But. And this is a hard but. Sometimes friendships end, or change in ways that hurt.

The first time this happened, it was not long after I graduated college. I didn’t know what happened. (It’s been years, and I’ve come to understand what most likely happened, and knowing the cause of the ending? That sucks, but at least I have an idea.) That friend and I went our separate ways, and I was bewildered.

How do you just cut someone out like that? Someone whose life you invested in? I felt so alone because what happened is that it forced mutual friends to pick sides, and it cut me off from moments in my friend’s life that I was sure I would be a part of. When I found out she was getting married, my heart just ached with sadness:

Yesterday I saw her picture on her wedding site. I see her face most days, because in most of my college pictures, she’s there, one of the four of us. There are too many pictures of her and I and them to cut out her face, so I am reminded daily that she’s gone. For two years… I have seen her face staring back at me and it’s never hurt like it did until yesterday. Yesterday her gentle ache became a pain that nearly brought me to tears. Because as she prepares for her wedding, I should be there, and I’m not. I should know what her wedding dress looks like, and how she will wear her hair, and the color of her bridesmaid dresses, and her honeymoon destination. But I don’t know.

Instead, I am reduced to finding out the small details of her life when I run into her family around town.

I should be there on that day to tell her that she looks beautiful, to not be nervous. I should be there to get her food when she’s lightheaded from nerves, to help lace up the back of her gown, to bustle her dress and smile for countless pictures. I should have been one of the first people she called when he proposed, and I should be there to help her pack up her boxes as she moves off with him and starts her — their — new life. I always thought I’d be there, helping hold any babies that came and painting the walls in her new homes and laughing together on holidays when our families got together.

But the truth is, I’m not and I won’t be there.

I bottled up that sadness and hurt and put on a brave face. I talked about it with some people, and slowly the years went by and I was sad when I thought about it, but the hurt lessened a little.

And then it happened again. Another close friend just disappearing. A few years later, a friendship dramatically changed with a third friend. Literally overnight things went from fine to horribly not fine.

The third time, I sat lacing my running shoes in my bedroom because I needed to get out of my house. I could feel the sadness radiating off my body and I needed to be outside where I could move fast and hard and pound my feet into the cement. Tears ran down my face because my heart was broken.

I felt broken. All of me, it felt like a giant failure. Like I was someone no one could be friends with. The lies jarring my mind were remnants of the things I believed as a little girl, that I wasn’t lovable and that no one wanted to be friends with me and I wasn’t good enough and that everything was my fault.

I looked at the women around me and realized that they had experienced the same kinds of loss, felt the same kind of sadness that I was feeling. One thing I also noticed is that I had to ask others about when friendships ended. It wasn’t like any one person had told me previously that she had experienced the loss of a friendship and I knew I could turn to her for advice and support. It was always something spoken about hypothetically, and that didn’t help me when I wasn’t living the hypothetical but the reality. People don’t talk about friendships ending, other than cliche quotes like “Some people come into our lives for a life, and some for a season, but everyone for a reason.”

Reading stuff like made me feel negative amounts of better. It was salt in the wound, and I wasn’t the only one who felt that way.

All these strong, intelligent, amazing women around me kept these broken, ended friendships close to them like they were ashamed of them.

Eventually I put the pieces together and came to the understanding that I wasn’t just hurt and sad, but I was grieving.

No one told me that when friendships end, we experience real grief. 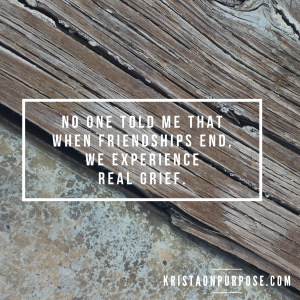 I thought my sadness was stupid. I thought I shouldn’t feel that sad over it. I was actually embarrassed to feel sad. That’s why, even though my insides were devastated, I kept telling everyone on the outside I was fine, that I wasn’t sad or hurt.

You know what makes me feel sad today? That I ever felt like I shouldn’t be disappointed in a friendship ending!

I have been spared a lot of grief in life. I have only known a small number of people who’ve died, and other things that grieved me have been minimal. It isn’t — wasn’t — an emotion I could easily identify in myself because I had so rarely experienced it. So it was almost shocking when I realized what I was feeling with these friendships ending or changing in the most painful of ways was, indeed, grief.

Suddenly, I had a name for that shaking-have-to-move-my-body-want-to-scream-and-wail-and-say-the-f-word-on-repeat feeling:

It was grief, and it was ok to feel it.

What I learned as a friendship fizzled, or dramatically blew up, is that all of those feels I kept trying to deny to others were valid.

I learned that crying myself to sleep because I missed someone was ok.

I learned that when I wanted to punch a wall because I wanted to call my former friend to share something with her but couldn’t, I wasn’t wrong or bad.

Through all of this, I have come to the realization that I have these feelings because these people mattered to me and they matter now.

That is what grief teaches me — if they didn’t matter, it wouldn’t be this hard. Although that’s so hard to swallow, there’s also a beauty to it.

Even with these friendships ending or changing, even with the grief washing over me, I can still say with no hesitation that these friends loved me well until the end, and hopefully until the end I loved them well, too. Although the pain of losing them is still very present for all three, I wouldn’t undo our friendships. Not for one second. I wish I could undo the things that went wrong, but even knowing that they’d happen, I would do it all over again.

I cannot picture my memories without their faces and laughter and text messages and group emails and stories in them. Some day, these memories won’t be as clear, and the feelings of grief will be less visceral, but they will still remain in my heart, and for them I will choose to be thankful for the time we did have and for the beauty is what was created.