My dad works every other weekend in his job as a police officer and this weekend, my mom went a ride along with him. Since I’m off work on Fridays over the summer, I offered to watch my sister today (she is eight) so my mom wouldn’t have to find a sitter for her. I haven’t gotten to spend as much time with her over the last few months as I normally do so it was nice to get to be there with her when she woke up. I’ve got a few random pictures of her I want to post… because man, I love this kid. 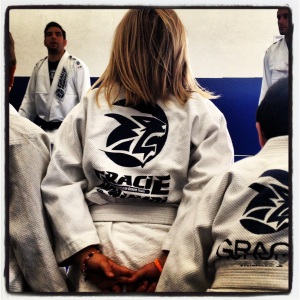 She got her first new belt in jiu jitsu on Tuesday! I am so proud of her. She is totally not a competitive kid and never really loved any of the things whose goal was to win (like soccer!), but she really likes jiu jitsu and it’s so good for her. I’m glad our parents encourage her to try new things and let her stick with the ones she likes. 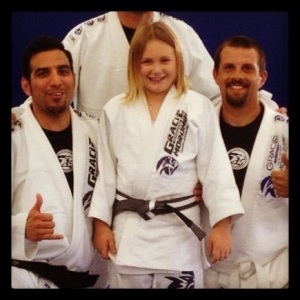 With her Professor (left) and other teachers after she got the new belt. Now she just has to get four white stripes, four red stripes, and four black stripes before she gets a new belt. Each stripe takes about a month to get, if she goes twice a week, so it’ll be another year. Still, as the sign in the studio says: “A black belt is a white belt who never quits!”

On Wednesday she became a third grader! My heart! The picture on the left was taken by mama on the first day of second grade, in August, and the one on the left was taken on Wednesday. She obviously didn’t grow as much as these pictures make it seem (I’m much taller than our mom and took the picture on the right so the angles are totally off!), but still — look at how her face has changed! She has matured so much during the last ten months. I am going to miss her second grade teacher. It’s too bad they don’t track with their students!

After school on Wednesday, she hung out in my office for several hours because Mama had to clean up after graduation (Mama’s school has its graduation in the gym of the college where I work). Charisse say a book she wrote in kindergarten that I’ve kept tacked to my office bulletin board because I think it’s funny (it’s fill-in-the-blank stuff, and she filled in the “On rainy days my worm ____” blank with “likes to show his butt.” Hah!), and she was inspired to write me one called “Three things I will always say!” I had to convince her to add an “n” in the word “funky” because without the n… well, it sounded like something an eight-year-old should not be writing!

Today we went to IHOP for breakfast and she beat me twice at tic-tac-toe (and I didn’t let her win!). The first game ended in a cat’s game. After I told her that she shouldn’t eat until her belly hurt, but eat slowly so her body had time to register that her belly was full, she taught me this gem: “If you were ever in a bacon eating contest, you just have to each as much as you can before seven minutes because that’s how long it takes for your brain to know your belly has food in it.” She loves science so I thought maybe she learned that in science class, but when I asked her where she learned it, she said, “On tv! See, tv can teach you things!” Um, not really the best argument, my love.

The rest of our day. We made a lemonade cake. Alas, we put it in a bundt cake pan, and even after letting it cool for two hours, I could not get it out of the pan (and I sprayed that sucker, too!). Oh well. She also worked on a painting and a homemade popup card for a friend’s birthday party today. She is so creative and I love it! (I also love that I can take credit for being the one to teach her how to make a popup card!)

I love this kid so much more than I have words to express. She brings me such joy and laughter (and yes, even a little frustration and impatience, but it is so worth it getting to be her big sissy!). During the graduation ceremony we were at on Wednesday (for our mom’s school), I was almost in tears the entire time, thinking about how in ten years, we will be attending Charisse’s graduation. I know it seems a little bit ridiculous to think about ten years down the road because it’s so far away — but honestly, if you told me eight years ago, when she was only a few months old, that she’d be a reading, science-loving, school-rocking eight year old, and that it would feel like but a moment since since she was born, I would have scoffed at you. It really, truly has flown by, these eight years.